Creatine (monohydrate) is a popular supplement, especially among bodybuilders and weightlifters. It is often cited as a supplement that actually works (whose effects are readily apparent). Yet, many do not consider whether creatine is useful for boxing.

Creatine is an amino acid that is naturally produced by the body and also consumed through red meats and seafood. It is found in your muscles (and brain), where it is stored until your muscles need energy. It is not a banned substance by any governing body in boxing.

Why use Creatine for Boxing?

The main upside we see with using creatine for boxing is the same upside we see when using it for anything requiring strength. Creatine helps the muscles produce the immediate energy required for contraction. The more immediate energy there is, the stronger the muscle is and the faster the muscle can contract. In weightlifting, this translates to lifting heavier weights; in sprinting, this might translate to a faster 200m sprint.

In boxing, creatine would affect anything strength related. Some people like to look at the fitness required for boxing as a mixture of strength-based and cardio-based fitness. While simplistic, this isn’t a wrong way to look at it. Since creatine enhances one’s strength-based performance, it would certainly be helpful for boxing. The use of creatine might lead to the boxer throwing stiffer punches or faster combos, better carrying his own weight or the weight of a leaning opponent, etc.

So Why Not Use Creatine?

More importantly, the use of creatine adds about 5 to 10 pounds of water weight to the boxer. While there may be some benefits to training with some extra pounds on the boxer, these benefits are offset by training slower due to the extra bulk. (Extra bulk really does slow down a boxer, in case anyone is skeptical.) This extra water weight would also make weight cutting much harder.

According to this source, creatine protects against brain trauma in rats. So it may protect one against the permanent effects of concussions or the general effects to one’s brain in sustaining punches to the head. 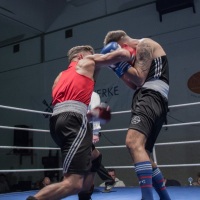